The CircularFLO Document Tools panel is used for adding the Preferences Panel and has tools for that quickly perform alterations to the entire document. 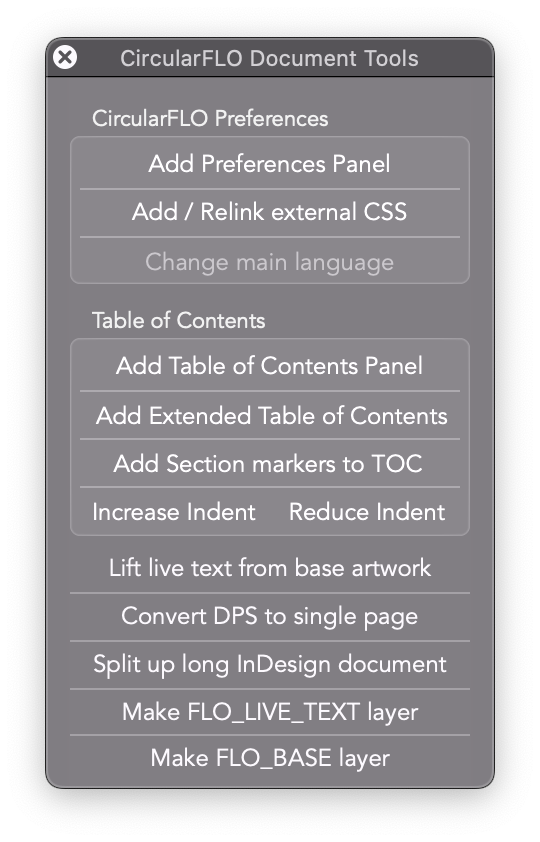 Experienced users may find it useful to add alternative CSS files instead of or in addition to the styles exported from InDesign. The paths to one or more CSS files to include in the ebook are added using this tool.

The language used for the ebook is declared within the ebook itself. This language is detected from the InDesign file but can be alter here. A tool to only offer valid options is coming soon…

Add Section markers to TOC: Following the use of the section markers from the CircularFLO Accessibility Tools Panel, the identified sections are added to a the clipboard ready for pasting into the Table of Contents panel.

Increase Indent: Add a > character to the beginning of selected rows of the table of contents which is used to indent or 'nest' entries at a different level beneath a heading. Can be used multiple times.

Reduce Indent: Remove a > character from the beginning of selected rows of the table of contents which is used to indent or 'nest' entries at a different level beneath a heading. Can be used multiple times.

Lift live text from base artwork: Text frames are identified and moved to a top layer. Images are moved to a bottom layer. See more here Lift InDesign text from backgrounds

Convert DPS to single page: Modify the active InDesign document to ensure the double page spreads (DPS) pages cannot be split apart in the resulting ebook. Facing pages in InDesign are converted to a wider single page. Useful when dealing with complex read aloud or preventing Amazon files being shown as single pages.

Split up long InDesign document: A little used older tool that is still included in case older or slower Macs or InDesign versions are struggling to work with larger files. The document is split into several smaller documents and added to an newly created InDesign book panel.

Make FLO_LIVE_TEXT layer: The creation of a layer named FLO_LIVE_TEXT which can be used as an alternative to InDesign text. See more here CircularFLO live text.

Make FLO_BASE layer: The creation of a layer named FLO_BASE which can be used as an alternative to InDesign exported objects. See more here Options to flatten images and text on export.

Thank you for leaving a rating!
Did you find this article helpful?